SOMETHING STRANGE IS GOING ON IN ANTARCTICA (UPDATED) 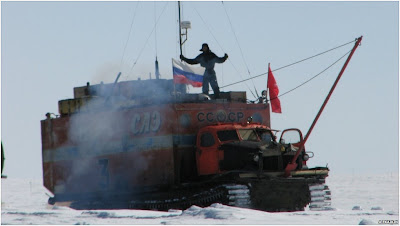 VOSTOK STATION ANTARCTICA is the scene of an unfolding mystery as Fox News reports the Russian scientists have been out of contact for many days and are presumed missing. This is one of the remotest places on Earth with a sadistically wicked temperature. Winter is setting in and these people are supposed to evacuate by Tuesday.

An American scientist associate John Priscu, a microbiologist at the University of Montana has stated that their lack of contact is understandable because they are at the brink of cutting through the ice to the lake and are too busy to communicate. That may be well and true, but it would seem prudent to announce that before you go incommunicado so as not to initiate an unnecessary rescue that could puts lives at risk. However, Dr. Priscu is quoted in Scientific American as stating it has been weeks since he last heard from the Scientists. Their drilling project may very well have ceased January 13. There was also the story of the mysterious sounds being heard around the planet mid January. What if these events are connected?

Antarctica is a land teaming in mystery. It is hard to fathom the complexities. As I guage the news I haven't seen any concern in the Russian media, but then governments do try to conceal their errors and abuses. There are many fables or veiled truths about Hitler fleeing to the subcontinent to his Neuschwabenland. And this is only the beginning.

In 1947 the United States invaded Antarctica in was called Operation Highjump. Noted polar explorer Admiral Bryd led the expedition aboard the carrier USS Philippine Sea. They approached from three directions as if attacking the continent. There were strange reports in the Chilean press about mass casualties and Admiral Byrd's dire warnings about protecting the United States from 'flying objects'. This has been one of the strangest facets of military and exploration history swept under the carpet. At the time James Forrestal was Secretary of the Navy. He lost it big time. He started talking about all sorts of things like the secret cabals controlling the Earth and such. He was declared insane and locked up at Bethesda Naval Hospital. His family sued the government for his release. They won. The day before the scheduled release James fell to his death from the Presidential Suite. There were scratch marks all over the window frame most likely made by a man fighting for his life not taking his life. His death was ruled suicide. It gets more bizarre even still. Nexus magazine reported on a story about a British special forces soldier who was part of a team sent to Antarctica. They had a mission to seal access points to the subcontinent with explosives. They were engaged in combat operations with intraterrestial beings. They sustained heavy losses, but sealed the tunnels. It can't get more bizarre than that. Britain's Secret War in Antarctica is the most definitive story I've ever come across. You would never sleep with both eyes closed down there let me tell you. No fiction writer could ever come up with anything like this. "In 1975 I investigated a UFO/Strange Black Ray Cloud formation, taken by a Belfast member of the British Antarctic Survey. He gave me some images of a pulsing cloud formation firing a black ray into the ice, which bounced off and reflected further away from him. Who knows... maybe someone down there is using negative energy beam weapons? Or was... since the images were taken in 1966."

You have a lot of material linked to this to study. Then there is today. Al Gore and company are in Antarctica. This seems strange too because the winter is setting in. His cover story is he's taking his global warming crowd with him on a National Geographic voyage. They are reporting the loss of ice. In spite of the fact that James Cameron is on the expedition, there is little to no film coverage.

Ólafur Ragnar Grímsson, the President of Iceland, and First Lady Dorrit Moussaief are joining the voyage too. James Cameron is moving to New Zealand after having purchased a massive property there. CNN man Ted Turner is aboard as well as UN Climate heads. I've done shows on this in the past. The elite rich fitting super yachts with submarines to go to the Antarctic with squads of former Navy Seals to provide protection from the evil penguins I guess. There is so much secret knowledge we could go on forever.

So is something happening down at the South Pole again? We wait for the next communication. The Gore expedition is supposed to end on the 6th tomorrow. All in all we love a good conspiracy. This is as good as it gets. Welcome to Neuschwabenland.

There's another angle on the elites going south for the winter. Prince William prepares for his first sortie with a crew member in the Falkland Islands. AP

Cameron’s office and the U.K. Foreign Office referred calls to the Ministry of Defense, which said it does not comment on submarine deployments, but Argentines were already upset that London dispatched Prince William to the islands on a six-week military tour, along with the Royal Navy’s most advanced destroyer, the HMS Dauntless. 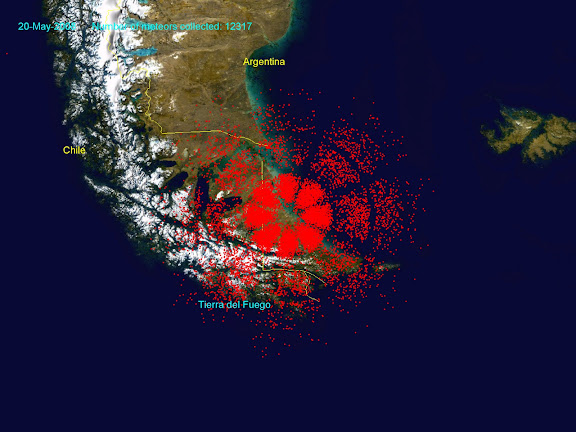 WEIRD RADAR ANOMALY AT THE TIP OF SOUTH AMERICA FROM A FEW YEARS BACK. THEY ARE COMMON IN AUSTRALIA.